Skip to content
The purpose of standard penetration test is to determine penetration resistance of sampler and to obtain representative soil sample. Two important things should keep in mind that the sampler is split-barrel sampler and sampling method yields disturbed soil sample. Thus this test is conducted by driving (into the ground) a split-barrel sampler to collect disturbed soil sample that represent corresponding layer and to measure resistance rendered to penetrate through the stratum by that sampler.

This sampling procedure and sample collected in this test method are not our concern in this article; we will mainly discuss about driving resistance. Driving resistance is related to driving energy which is exerted by falling a driving mass on drilling head. For convenient of discussion, at first, it is required to include some terminology about drilling equipment and test procedure.


Drilling rods-Rods through which downward force is exerted to advance drill bit with necessary torque into the borehole.


Drill head or anvil-This is an essential part of drive-weight assemblage on which falling hammer strikes. It is a media to transmit hammer energy into drill rods.


Hammer-This is the important part of drive weight assemblage which exert impact weight of 623±9N (140±2 lbf) by falling from specified height. This energy is used to penetrate hole and to make sample for field or laboratory. 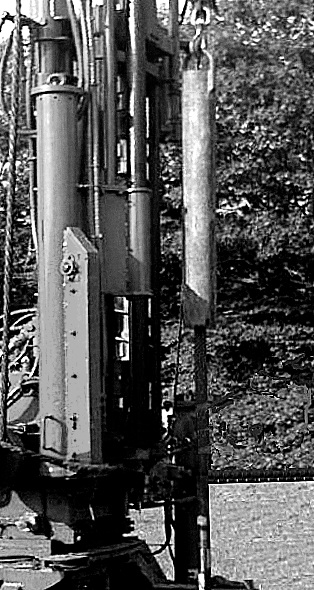 Hammer fall guide-This term is self-explanatory i.e. guide the falling of the
hammer.

Sampling rods-Rods connecting drive-weight assemblage to the sampler.
Cathead-The rotating drum like windlass over which the rope pass back
and forth. This is a lifting system around which a rope is wrapped by operator
to lift and successive dropping of hammer by tightening and loosing of the rope
with counterclockwise and clockwise rotation of drum.
N-value – This represents number of blow as an indication of resistance
of soil to be tested against penetration. The N-value is blow counted to penetrate
each foot on the ground which is a summation of blows counted to drive the
split-barrel sampler up to 150 mm to 450 mm (6 to 18 inches) depth from where
the sampler is seated.

Standard penetration test has been widely used all
over the world since 1927. But some modification in recoding N value was made
in 1967. The previous testing required only seating of the sampler and driving
300 mm. The procedure can reduce N count up to 50% as the driving of sampler
first 150 mm to seat the sampler on undisturbed sample presents significant
frictional resistance on the sampler to penetrate next 300 mm. Interestingly many
corrections are still exist depending on N counting obtained this previous
procedure.

After ASTM included standard penetration test, it was often reported that N-values taken from adjacent boreholes with same test arrangement or from nearby holes but using different equipment can not be reproduced. This becomes an important issue for the credibility of this test or making correlation between penetration resistant recorded using different equipment. Due to the wide popularity of this test, geotechnical engineers paid attention to this problem and Gibbs & Holtz in 1957 figured out key points why reproducibility is failed.

The main factors that influence reproducibility are
After these not much information was revealed until 1971 de Melloe draw attention about driving energy.
Discrepancies between obtained N-Values can be resulted from many factors like

By following ASTM D1586 formation of quick condition can be avoided. The regular inspection of drive shoe is essential, especially, after finding refusal i. e.during hard stratum.


N.B. Quick condition is the situation where
effective stress of the soil becomes zero. This condition in the bottom of the
hole is occurred when

Why is driving energy in SPT significant?

Proper attention to the causes of discrepancies in
N-values revealed that the difference between the input energy of driving and
actual energy exerted on the sampler hinders the reproducibility. The input energy
gets dissipated around the sampler into the adjacent soil. The amount of
dissipation makes the difference.
Let’s define driving energy-
It can be easily realized that blow counted during penetration
would have direct relation with driving energy. The theoretical value of
driving energy can be computed as follows

Substituting v from the
equation (2) into equation (1) will produce

Riggs et al. found the actual input value of driving energy Ea exerted on the sampler to penetrate through ground ranging from about 70~100 percent. Kovacs & Salomone obtained in the previous years (1982) a further lower value of about 30~80 percent. The possible causes of discrepancies are as follows:

·     In automated system there have more control on drop height h ±25mm
·    When low-speed power take-off pulley is used the Ea Value is dependent on  many factors like
·  Condition and diameter of rope.
· Again condition and diameter of cathead; here conditions refer to whether it  is     clean or rusty, it is diameter 125 mm or 200mm.
. How many turns is the rope kept around the cathead; it may be 1.5, 2, 3 etc.,but its nominal value is 2
turns and has wide use.
· Pulling the rope from the top and from the bottom not provided some energy to  be exerted on the sampler. Pulling from top means 1 ¾ turns and from bottom  means 2 ½ turns.
· Overlift of hammer; the operator pull the rope up to specified drop height then      release it to allow gravity fall of hammer which is generally overlifted by operator by a height of 50 mm in excess of drop height specified=810 mm (Riggs, 1986). This is actually a visual error, operator pulls the rope around the spinning cathead and observe lift height of hammer up to a mark set on guide rod, after reaching specified mark, he releases the rope back ward to loosen it to allow hammer to fall on anvil. Thus reaction time and visibility of mark result over lift. The usual rate of blow is 40~50 per minute.
·  Smoothness of split barrel sampler, sometimes a liner is provided inner surface of sampler which increases N values resulted from increase in drive resistance. Thus sampler without liner will
result smaller N value than that have liner. It is common not to have liner in sampler.

· Length of drill rod; the influence
of it is not significant when length is more than 10 m however when length is shorter
and N value less than 30 it is significant. Gibbs and Holtz in 1957 at first
noticed this effect which was later quantified by Mclean et al. by developing computer
modeling to analyze effect of drill rod length and other factors like sampler resistance.
· Some properties of soil:
· N values are found larger in soils having over consolidation ratio, OCR>1 and having larger relative density, Dr
than that for normally consolidated soils.

·  Overburden pressure; for a same density N values are found smaller in soil for smaller P0’ as it is nearer the ground surface.

. Oversize boreholes will reduce N values N values as well. But in case of rotary-stem auger with auger left in the bottom of the hole close contact with bored soil surface this reduction in not significant; the oversize means 150~200 mm dia borehole.
. Significant influence of degree of cementation
on producing higher N values is also observed in cemented zone with little
overburden pressure.

So it is required to standardize SPT based on the energy
ratio, Er. Er can be computed as

The measurement basis of Ein is observed hammer
velocity while impact occurred with anvil or energy measured in drill rod just
below drive head (anvil). However, when we use equation (3) it would provide a
fair value as it is not dependent on equipment used to drive.

What is standard energy ratio in SPT?

Now we have new term Er which provides us an
energy ratio of a particular system of equipment. Now we have wide scattered
values of Er and blow count N resulted based on Er which
should be a unique value for a soil at certain depth. Thus we require a
standard energy ratio Erb which will be a reference for Er
as an example when an estimated Er for particular drill rig is 45,
if Erb=70, then we need an adjustment of N value to represent value
for drill rig of Er=70.