Skip to content
Foundation of structure and underlying soil are of different physical nature. But when they act together to establish a stability, a combined system is formed and the mechanism of this system involve one entity to influence the performance of other. The final result of this is an interaction between two components. Knowledge about realistic distribution of contact pressure will yield an economical design and soil-structure interaction problems are now an important topic of professional interest and related academic works are conducted about this in foundation engineering.

A foundation usually transmit load to soil underneath, a response of which soil will exert a reaction pressure to the foundation at the contact surface between the soil and foundation. Thus foundation is media to transfer load between superstructure and soil. Foundations are designed to distribute load to soil as soil cannot support load of concentrated form (like column or structural wall etc.) as they are arrived from top.This process of load transmission put on soil reaction to foundation i.e. contact pressure. As soil have much lower strength than concrete above, the foundation spreads load to meet bearing, settlement and for other issues.

When two components meet to form system, these must satisfy internal stability and external stability. As internal stability, we can include bending moment, shear (both beam shear and punching shear) and rotation of base (torsional rotation) etc. As external stability we can include (though not relevant) sliding, tilting etc. As soil exerts reaction from below and locations of concentrated loads from above are of different nature and intensity, structurally bending is induced on foundation. Thus the foundation need to be designed properly to exert resisting moment to counteract bending moment produced by reaction and structural loading and when this is properly done, the foundation will be capable to transmit loads of superstructure to supporting soil. Static equilibrium: For static equilibrium  ∑ V = 0 and ∑ M = 0 The first condition will be satisfied when  Total values of contact pressure = Sum of load applied The total contact pressure can be measured by calculating area of contact pressure on the diagram. The second condition will be satisfied when resultant of contact pressure and that of applied loads are collinear (i.e. there will be no resultant moment).

We can calculate average contact pressure depending on the applied load easily. 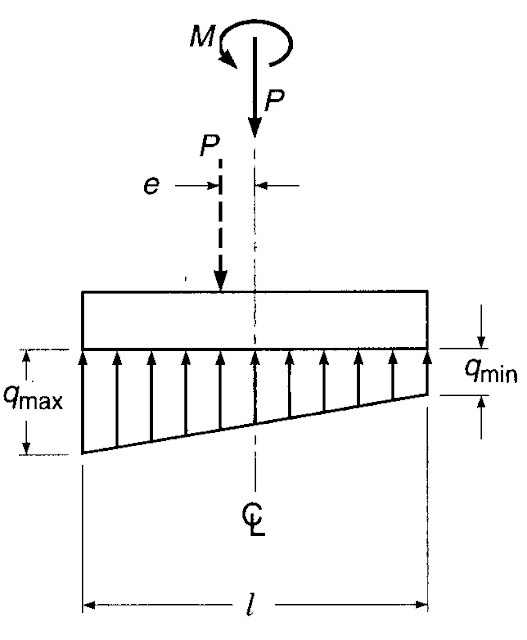 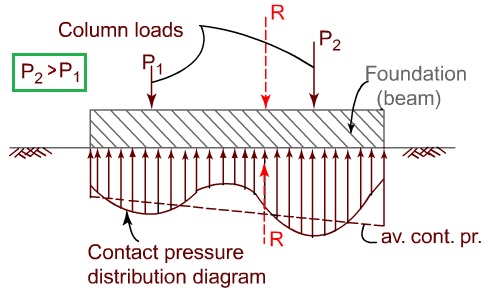 Stiffness of foundation means whether it is flexible or rigid. Between these two it may be of stiff. Let’s try to explain this:

When a foundation is flexible, it will not show any resistance against deflection. It is very easy to realize that it will deflect more near stress concentration. As usually column loads are applied at the center of foundation, it will take a shape of dish, thus a dish shape deformation is observed.
Example: earth embankment is considered to have flexible foundation and flexible structure to be supported.

This type of foundation has infinite stiffness which will never deform. Thus a uniform movement is observed, completely omitting differential settlement.  Example: a small pad foundation of reinforced concrete having significant thickness. Stiffness of soil: Behavior of stress distribution is different in different types of soil. In case of coarse grained soils individual grains are found somewhat mobile which will result a tendency of soil located near perimeter of foundation to shift outward slightly toward regions of lower stress concentration. On the other hand, in clay soils applied load results to develop shear resistance near the perimeter of foundation which in fact is added to upward reaction. Stiffness of clay soil under footings will be uniform under entire areas of a foundation whereas stiffness of sandy soil increases with the increase in confining pressure. As confining pressure is at the region under center of a foundation, the stiffness will be also greatest at this region. Thus in the regions near periphery of foundation the stiffness will be smaller. Loading conditions:

Following figure shows contact pressure distribution under a circular raft having point load located at the center; considered raft is supported on incompressible soil like clay provided by Borowicka ( in 1939 which is reviewed by Davis and Poulos, 1974). We can easily interpret that whatever the stiffness of foundation or raft, the contact pressure is not uniform. In case of flexible foundation, a concentration of contact pressure is observed under point load as usual which is found more uniform in case of stiff foundation. The stresses under the edges of rigid foundation are found to increase considerably which is very similar to pressure distribution produced in clay soils under uniform superimposed pressure. Thus it can be said that point load applied at center of rigid foundation can be compared to uniform pressure.

The above assumption of uniform pressure distribution will result in a slightly unsafe design for rigid footing on clays, as the maximum bending moment at center is underestimated. It will give a conservative design for rigid footings on sandy (cohessionless) soils, as the maximum bending moment is overestimated.
As contact pressure is an elastic response of soil under applied load, the most accurate and the best approach to determine the distribution and magnitude of contact pressure should be based on theory of elasticity. Still there have other simplified theories like 'Theory of subgrade reaction' which was developed to handle this problem more practically. However, at the ultimate stage just before failure, the soil behaves as an elasto-plastic material ( and not an elastic material) and the contact pressure is uniform and the assumption is justified at the ultimate stage.