Skip to content
Compressive Strength
The main measure of the structural quality of concrete is its compressive strength. This property of concrete is commonly considered in structural design. Depending on the mix (especially the water-cement ratio) and time and quality of the curing, compressive strength of concrete can be obtained up to 14,000 psi or more. Commercial production of concrete with ordinary aggregate is usually in the 3,000 to 12,000 psi range with the most common ranges for cast-in-place buildings from 3,000 to 6,000 psi. On the other hand, precast and prestressed applications often expect strengths of 4,000-8,000 psi.


Tension Strength
Although concrete is not normally designed to resist direct tension, the knowledge of tensile strength is used to estimate the load under which cracking will develop. This is due to its influence on the formation of cracks and its propagation to the tension side of reinforced concrete flexural member. Shear, torsion and other actions also produce tensile stresses to the particular section of concrete member. In most cases member behavior changes upon cracking. So tension strength of concrete is also considered in proportioning concrete member. This strength is of interest in designing of highway and airfield slabs as shear strength and resistance to cracking are very important to sustain such loading. The tensile strength of concrete is relatively low, about 10 to 15% of the compressive, occasionally 20%.

Generally, tests for this property are made on cylindrical specimens of height equal to twice the diameter, usually 6×12 in. impervious moulds of this shape are filled with concrete during the operation of placement as specified by ASTM C172, “Standard Method of Sampling Fresh Concrete”, and ASTM C31 “Standard Method for Making and Curing Concrete Test Specimens in The Field”. The cylinders are moist-cured at about 70 degree F, generally for 28 days, and then tested in the laboratory at a specified rate of loading. The compressive strength obtained from such tests is known as the cylinder strength fc’ and this term is mainly used in design purposes.

The tensile strength of concrete can be measured by radically different tests, namely flexure, direct tension and splitting, and the resulting values of strength are not the same. A direct application of a pure tension force, free from eccentricity, is very difficult. A direct tension test, using bond end plates, is prescribed by the U.S Bureau of Reclamation. In flexural strength tests, a plain (unreinforced) concrete beam is subjected to flexure using symmetrical two-point loading until failure occurs. 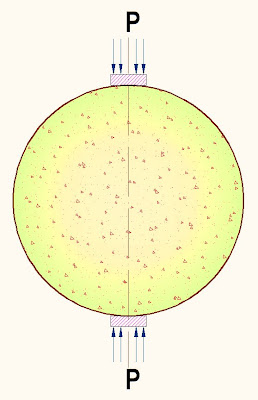 British Standard BS 1881: part 118:1993 and ASTM C78-94 prescribed third point loading on 150 by 150 by 750 mm beams supported over a span of 450 mm. The modulus of rupture is determined from this test. In splitting tension test, a concrete cylinder, of the type used for compression tests, is placed with its axis horizontal between the platens of a testing machine, and the load is increased until failure by indirect tension in the form of splitting along the vertical axis takes place.

Factor affecting the relation between tensile and compressive strength

A number of factors affect the relation between two strengths. These are

The relation between the flexure strength and compressive strength depends on the type of coarse aggregate used, except in high strength concrete, because the properties of aggregate, especially its shape and surface texture, affect the ultimate strength in compression very much less than the strength in tension or cracking load in compression. The behavior was confirmed by Knab. In experimental concrete, entirely smooth coarse aggregate led to lower compressive strength, typically by 10 percent, than when roughened. It seems that the properties of fine aggregate also influence the ft/fc´ ratio. The ratio is furthermore affected by the grading of aggregate. This is probably due to the different magnitude of the wall effect in beams and in compression specimens: there surface/volume ratios are dissimilar so that different quantities of mortar are required for full compaction.


age is also a factor in the relation between ft and fc´: beyond about one month, the tensile strength increases more slowly than the compressive strength. So the ft/fc´decreases with time. This in aggrement with the general tendency of the ratio to decrease with an increase in fc´.

The tensile strength of concrete is more sensitive to inadequate curing than the compressive strength, possibly because the effect of non-uniform shrinkage of flexure test beams are very serious. Thus air-cured concrete has a lower ft/fc´ ratio than concrete cured in water and tested wet.


Air-entrainment affects the ft/fc´ ratio because the pressure of air lowers the compressive strength of concrete more than the tensile strength, particularly in the case of rich and strong mixes. The influence of incomplete compaction is similar to that of entrained air.


Light-weight concrete conforms broadly to the pattern of the relation between the ft and fc´ for ordinary concrete. At very low strength (300psi) the ratio ft/fc´ can be as high as 0.3, but at higher strengths it is the same as ordinary concrete. However, drying reduces the ratio by some 20% so that in the design of light-weight concrete a reduced value of ft/fc´ is used.


It is expected that these two types of strengths are closely related, but there is no direct proportionality. It is noticed that with the increment of compressive strength, the tensile strength is also increased but at a decreasing rate.


A better correlation is found between the various measures of tensile strength and the square root of the compressive strength. A number of empirical formulae connecting ft and fc´ have been suggested, many of them of the following type:

where k and n are co-efficients. Values of n between ½ and ¾ have been suggested. The former value is used by the American Concrete Institute, but Gardner and Poon found a value near the later, cylinders being used in both cases. Probably the best fit overall is given by the expression:


where, ft is the splitting strength, and fc´is the compressive strength of cylinders, both in megapascal. If the stress is expressed in pounds per square inch the co-efficient is replaced by 1.7. The above expression was suggested by Raphael. A modification of Oluokun is


where the strength are in megapascals; the co-efficient becomes 1.4 in psi.


An expression used in British Code of practice BS 8007:1987 is similar, namely


Bearing in mind that the compressive strength is determined on cubes( in megapascals); ft represents the direct tensile strength.

The ACI Code contains the recommendation that the modulus of rupture fr be taken to 7.5 √ fc´for normal weight concrete, and that this value be multiplied by 0.85 for “ sand-lightweight” and .075 for “all-lightweight” concrete giving values of 6.4 √ fc´ and 5.6√ fc´ respectively for those materials. The former refers to light weight concrete containing natural sand for fine aggregate. Linear interpolation may be used for mixtures of natural sand and lightweight weight fine aggregate.