Skip to content
Concrete has wide variation of use as construction materials, as its behavior can be modified as per design consideration. Concrete can be said ideal material for marine structures where any marine environments like submerged, complete and partial exposure, tropical, temperate and arctic may exist. Marine structures in ocean, coastal or harbor can be constructed economically with concrete offering expected strength and durability.

At first let us discuss about floating concrete structure; the structure that are considered as floating, the dead weight of it is approximately compensated by the buoyancy. When a structure is submerged in sea water it is subjected to continuous hydrostatic pressure. These hydrostatic pressure definitely exerts loads on structure additionally it force water to penetrate into the concrete through Through any weak point, if any. Microcracking in concrete is very common; though durability is not concern of this post, the weight of concrete will be increased with this penetration leading an increase in density by 2% upon absorption, which may increase the net buoyant weight up to 40 to 50 percent.


Impact loads from debris and ice

Moving debris and ice may produce impact loads directly on concrete structures. These materials may accumulate on structure and increase effective area, thus exert additional load. When ice is accumulated as solid sheet, it will fail by crushing. In this case ice breakers should be installed to pile up ices until it fails in tension.

Debris is that mass that can float in flow path with an inundation depth Which cannot withstand water flow. When debris are carried with tsunami wave, they may be trees, cars, wooden poles used for utility supply, complete or fraction of timber framed houses. Sometimes some debris that don’t float may transported by wave when they are very strong like pieces of concrete and boulders. In normal case, debris are bottles, waste of ships, cans, fishing equipment, automobile tires, nets and abandoned fishing line.

Debris and ice cakes often become wedge within adjacent piles which exerts torsion and may lead to break of piles. An example may be included here, broke down of better piles adjacent to piles where large mass of ice were accumulated; during spring the mass was thawed and at low tide it slide down to exert load to that piles. Break water may be also effected by formation of ice cakes resulting wedging units apart from each other and during high tide they are lifted up.

It seems that the loading of debris and ice is same on different structural type like concrete, steel and timber, but the consequences of it are significantly different, as it depends on physical and structural characteristics in many cases. A concrete pile may be more susceptible to failure under impact and its resultant torsion whereas reinforced concrete sea walls or caissons often have more resistance as they possess local rigidity, mass and to some extent have ductility at low temperature.

When water is allowed to enter inside concrete structure and get frozen it will exerts a bursting pressure. If a pile or caisson have hollow-core, must have means to impede freezing like providing Styrofoam or wood log to float side and/or provision to connect with unfrozen water beneath surface like vents. If such precaution is not taken serious bursting and subsequent failure may occur.

Movement of the sea water produces different types of loads on the concrete structure which are required to evaluate overall stability of marine structure.

Speed of current in ocean usually run from 0.5 nautical miles per hour (knot) which attain maximum value of about 2 knots. In restricted channel or narrow inlets, even higher velocity may occur. In contrast to conventional belief, in some location it is often found that current in ocean may be almost same at bottom as that in surface. In case of estuaries where salt water meet with fresh water, salt water flooding at the bottom is observed while the surface zone is still ebbing.

Prolonged winds in same course can generate strong currents in open sea. In some region the current may rotate during alternate folding and ebbing.

The load exerted by current can be computed by following formula 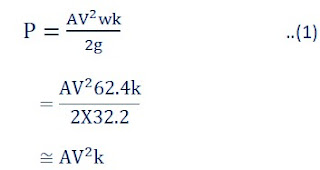 An alternative calculation of current forces can be used based on naval architecture approach where forces are expressed as summation of two components, Surface friction (Pf) and eddy action (Pe):

Where
Θ=angle at which the flow is inclined with face of srucutre
C=constant can be taken as 0.5
S=area of immersed surface, Sft
A=area exposed perpendicular to the current, Sft

We know current produces pressure on the concrete structure. It often results an eddy action when they flow over the top surface which will exert force having tendency to lift the structure that remain on the bottom. On the contrary to that, when a structure hangs just above the bottom, there a pulling down tendency of current resulting to increase in the effective weight of the structure.

On a submerged structure, waves exerts cyclic and dynamic loading. The waves indeed may break on the surface with enormous energy. It has been measured that the stress induced by local impact may be as large as 3 Tons/Sq. ft. For a complete submerged structure, during the wave cycle a dynamic uplift forces may occurred; It is fortunate that these forces are not usually coupled with maximum lateral forces.

When differential pressure exists on the either side of any bottom supported marine structure, tunneling underneath may occur which is followed by serious erosion in the bottom sediments. This can reach up to composite structure like back pressure, break water may disintegrate them into the individual components and left out them with an explosive force generated by hydraulic ramming.

This phenomenon of conversion of wave force into kinetic energy can be used deliberately to dissipate and imbibe wave energy. This is done by providing holes in vertical walls of caissons of quay wall, offshore storage facility or breakwater to absorb fraction of the wave energy.

Regarding breaking waves, it can be included that in this type of wave, after reaching a certain level of amplitude, enormous amount of wave energy is transformed to turbulent kinetic energy.

When surface waves reach to shore, they breaks down to from foamy, bubbly upper surface known as surf and the zone within which waves breaks are called surf zone. This zones are usually shallow normally lies between 5 to 10 m which makes the waves unstable. Surf may produce cavities in the surface of structures which may only be controlled by intensive care to obtain a dense, hard surface leaving no projection and fins. Special treatment to achieve this may be required in extreme environment.

Ship impact load was ignored in design of marine structure in the recent past. The damages due to such impact are mitigated by providing suitable fendering systems. The transportation of goods, machinery and fuels are increasing day by day and the size of vessels are also increasing to meet such requirements. Such large vessels can produce enormous impact which cannot be mitigated by fendering system alone and critical marine structures seek special consideration to minimize damage by absorbing energy. This is done by increasing mass of marine facilities, well-arrangement of reinforcements, prestressing and designing structure to act as diaphragm.

When a marine structure, may be of concrete or other suitable material, is subjected to earthquake agitation along with direct acceleration there will be additional acceleration imposed by mass of water. As concrete is reliable and frequently used for very large marine structure like off-shore storage facilities for oil, bridge piers and caissons etc., this dynamic impact exerted by water must be treated in design.
All earthquake do not produce tsunami; when earthquake is followed by tsunami, the result may often be severe. Here it is important to differentiate earthquake loading form that of tsunami.

At first let us define characteristics of earthquake and tsunami forces. Earthquake force have dynamic characteristics; they are short term high frequency force. Whereas tsunami forces have characteristics of sustained fluid pressure that vary at different level of structure based on depth with long periodic cycles of flow having reverse effect.
Thus the failure modes of structure are significantly different under these loading.In case of tsunami loading additional locally generated high-intensity water pressure directly applied on individual components with inertial forces produced by the external loading (earthquake) acting through the load path on lateral force resisting system. In addition to two simultaneous loading, dynamic impacts of debris along building perimeter should be considered i.e. peripheral structural components of buildings should be designed to resist strike of debris which is already
described in the previous sections.
In ASCE7, the return period for calculating ultimate loading on structure may be exposed to tsunami loading is defined 2475 years. This code specifies necessary design load and strength of structural components for tsunami pressures. Tsunami are rare events; selection of structural system and design of structural components should account the forces and its effects on structure,FTSU. The load combinations should be used as below
0.9D+FTSU +HTSU                                  …(1)
1.2D+FTSU+0.5L+0.2S+HTSU                  …(2)

Where FTSU= Effect of tsunami loading for incoming and fall back flow directions,
D=Dead load
L=Live load
S=Snow load
HTSU=Foundation pressure in lateral direction under the action of tsunami in submerged condition.
Following tsunami effects should be considered in structural design of marine structure:structure:
The calculation of loads with its effects and structural design are beyond the scope of this article.

Concrete has low heat conductivity and marine concrete structures are of massive size as compared to steel structures; thus thermal gradient of notable degree is occured. The possible cause may be relatively hot upper portion of structure absorbed heat under the sun in contrast to cooler zone of submerged portion.
The opposite scenario may also be appeared in sub-zero air temperature in arctic regions in contrast to warmer submerged zones. Gradient may occur when concrete vessels contains hot oil or when flows through piping enclosed within concrete structure or well casing. Temperature gradient throughout concrete cross-section is nonlinear, may drop or increase near surface of cold or heat face respectively which may lead to cracking. The cracking neutralize the strains through the reduction of stiffness; thus thermal stresses has self-limiting tendency.
Severe thermal strains can also be appeared due to heat generation during hydration, though it is of temporary nature, which is followed by cooling at different rates throughout the cross-section of typical massive concrete marine structures. The most efficient way to mitigate thermal strains to provide insulation to the forms and to blanket the concrete surface immediate after removal of the forms.