Drilling slurries were being used successfully in oil well drilling projects conducted over the last 100 years. Thus when issues are drilling of foundation pile, we have large practical and technical knowledge about applying slurry displacement method. After the second world war, this method became popular  in Texas in drilling shaft construction projects. But in such early applications of this method soil- based (containing clay) drilling slurries were used to penetrate holes into the ground.

After this casing was introduced to stabilize the hole for drilled shaft construction. Considering difficulties with casing application, development of drilling slurry was inevitable and finally in the 1960’s casing was eliminated by the application of processed clay slurry; synthetic slurry was not yet introduced, just processing mineral clay to have better advantages.

Unfortunately properties of processed minerals cannot be controlled as desired. Two researchers, the Touma and Reese was first conducted extensive tests on these slurries under a research conducted jointly by the Texas Highway Department and University of Texas in 1972;

the objective of this research was to explore physical properties of mineral slurries to avoid failures of drilling projects observed in mid-1970’s and to determine a proper method of preparing and reusing of drilling slurries.


What are the types of pile drilled with slurry?

The pile type that will be discussed is cast-in-drilled-hole piles, known as CIDH pile. The name is self-descriptive i.e. holes are drilled into the ground to desire elevation which will be filled by concrete having reinforcement skeletal. Such pile is most popular and very common to us. Procedure seems very simple under good ground conditions.

In defining good ground condition, let us consider an ideal condition where drilled holes remain in desired shape and can be kept uncaved until concrete is poured. This condition is very unlikely to happen in the site and geotechnical engineer need to choose an appropriate method to overcome this problem. Main difficulties in drilling is cave-in; thus it is difficult to drill angular piles and ground water make it impossible. So installation of CIDH piles are possible if dewatering can be done effectively (without much effort) and casing is not used for concreting.

Why are clays required for drilling purposes of pile?

To answer this question, it is required to discuss principles of drilling slurry usage:
Let’s start, the objective of using slurry in excavation to produce positive hydrostatic pressure to keep excavated wall intact without collapse. Here we are discussing excavation of piles without casing or uncased portion of excavation.

The positive hydrostatic pressure must need a media to transfer stress to the walls of any excavation. This medium is produced by the filtration of slurry into the excavated surface. This medium is called filter cake. Mineral slurry like bentonite clay result formation of filter cake by deposition of clay solids into the permeable formation. Thus the filter cake renders the unstable permeable ground formation around a drilled hole thick viscous surface against which hydrostatic pressure can be exerted.
The depth of these permeation zone may vary from inches to feet which depends on ground formation through which drilling is progressed and type of drilling slurry. Now two new terms are appeared one is positive hydrostatic pressure and filter cakes; the details of these terms are presented below:

What is positive hydrostatic pressure?

Positive hydrostatic pressure is produced by charging a column of fluid into the drilled hole, this is nothing but a pressure in excess of interstitial pressure of soil layer encountered around drilling process, known as pore pressure as shown in figure-(1)

It has been found in previous experiences that about 6~7 feet column of water is generally sufficient to make an excavation stable. This value is equivalent to 3 pounds per square inch or 0.2 atmosphere. A more convenient way to figure out 3 pounds per square inch is to imagine a 432 pounds on a square foot of excavated wall. This pressure is apparently adequate under standard operating practices to keep holes open.
Thus positive hydrostatic pressure is the hydrostatic pressure beyond and above which ground water exert in ward pressure to excavated surface(figure-1). Assume a ground condition where static ground water table lies 15 feet below ground level and to keep excavated hole open we have to provide a fluid column of 7 feet above this level (GWT level); fluid level, more precisely, slurry level should be maintained at 8 feet below ground surface. One can fill the entire hole with slurry but in most cases, it is not necessary. On the other hand excess hydrostatic pressure of slurry may result penetration of fluid into the soil. This may accelerate fluid loss which is considered unwanted, uneconomical as permeation of slurry may be significant when it finds a way through granular layers.

What is filter cake?

When a drilled hole is filled with slurry and positive hydrostatic pressure is exerted on the sides of the excavation, some portion of soil cutting in addition to drilling slurry may be forced into ground formation.  In this process, particles of the slurry seized or filtered through the formation to some extent and deposited on soil grains of that formation. Thus filter cakes are formed by mineral slurry with some excavated solid laden by slurries. The process is called filter caking; filter cakes often called mud cakes which help to stabilize surface of drilled hole temporarily.

Filtration of drilling slurry is dependent on many factors:

These are few factors to be named in this article, but there are many other factors that influence filtration process; of which behavior of ground formation and how long drilling slurry permitted to exist in drill hole are the two prime factors.

This parameter has influence on development of filter cakes, the thickness of the layer developed on the surface of the drilled hole, depends on the permeability of formation. Generally thickness of filter cakes will be more on granular permeable ground formations like sands. As there have larger spaces between soil grains, drilling slurry with soil cutting have easy access into the ground formation and infiltrate more distance before getting clogged. Here the driving force is positive hydrostatic pressure. 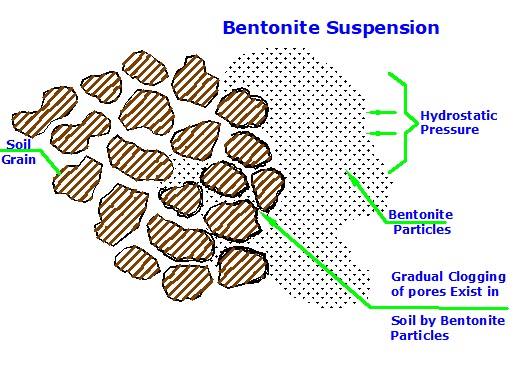 Duration of presence of drilling slurry

It should keep in mind that mineral slurries are often replaced by synthetic slurries which are reported to perform better in all respects. We are concerned about clay drilling slurry which are mainly of bentonite and attapulgite origin. Filtration is related to mineral (clay) slurries that form filter cake to help to keep the sides of the drilled hole stable temporarily before concrete is poured. When this purpose is served filter cakes are no longer required and must be taken off before concrete placing.

If filter cakes are thin enough,
during rising of poured concrete column, it is scraped off by concrete from the
sides of the hole; an example filter cakes on very tight ground formation. But in
case of filter cake of excessive thickness, the concrete cannot scape entire thickness
while rising to the top. Thus filter cakes left on the sides of drilled hole
becomes a potential slip plane in between side of hole and concrete casted for
pile. This results significant reduction of skin friction of the pile leaving no way
to depend on tip capacity; hence filter cake reduces overall pile capacity and
must be expelled before concrete placement.