Skip to content
Microcracking in concrete is very important issue which is formed in microstructure. The causes of microcracking are manifolds; in simple word, the main causes are:
• Large variation in mechanical properties of constituents (specially hydrated cement paste and coarse aggregate)
• Thermal and shrinkage movement
The first one is the main cause; as this cracking is formed at interface between mortar and embedded aggregate.When failure is initiated the cracking pattern follows this interface. This zone is known as interface zone, sometimes also called transition zone.Behavior of transition zone has to be realized to find cause of microcracking. You should keep in mind that microstructure of bulk cement paste is quite different form hydrated cement paste around coarse aggregate.

The main cause behind this is that dry particles of cement, during mixing, cannot be reached to comparatively large aggregate particles i.e. cannot be packed closely. Thus less cement particles are available to be hydrated and filled the actual voids present due to improper packing which yields a zone of higher porosity than that of bulk cement paste hydrated at relatively greater distance; thus high porosity arises in interface zone.

The higher the porosity, the lower will be the strength. Let take a look at microstructure of interface zone:

• Immediate around aggregate surface, there has an about 0.5 µm thick layer layer comprising of oriented crystalized calcium hydroxide.

• Behind that there has identical thickness of C-S-H layer which is known as duplex film.

• Next layer is 50 µm thick, this layer is the actual interface zone which contains hydration products of cement having lager crystals of calcium hydroxide; but no unhydrated cement particles are found there.

The significance of furthermost layer is two folds; these are 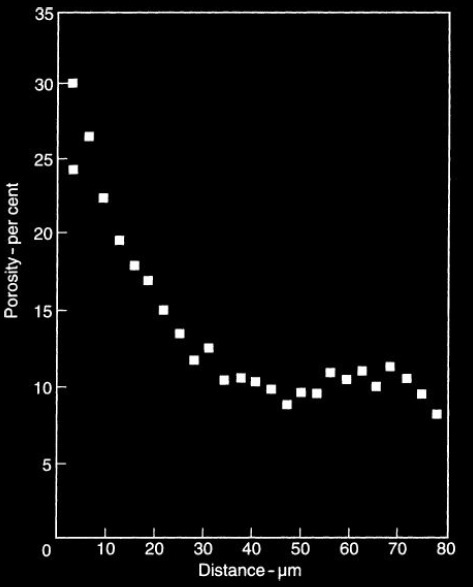 Now we will discuss about some special cases; like inclusion of pozzolana or silica fume, chemically reactive fine and coarse aggregate and lightweight aggregate.

Silica fume and pozzolana can be included in concrete to strengthen interface zone. When pozzolana is added to concrete, the strength of interface zone is increased due to secondary reaction of existing calcium hydroxide with pozzolana. But it takes time; thus gradually porosity is reduced. Silica fume is very much fine and especially effective as it is much finer relative to cement particles.

Microstructure of interface zone or transition zone is affected by mineralogical characteristics of fine aggregate too, especially when they are chemically reactive. Consider limestone is used in concrete, chemical reaction between cement paste and limestone yields a denser interface zone.

If outer layer of lightweight aggregate is more porous, mobile ions are attached to porous surface which leads to formation of denser interface zone. Thus mechanical interlocking between hydrated cement paste and aggregate particles is improved.

The study of interface zone is not as simple as discussed above. Therefore, experiments about interface between cement paste and individual rock particles should be resort to. But in concrete mass there have many neighbor aggregates surrounding a particular aggregate of our interest. Thus tests results may mislead as they neither encounter interference of neither neighbor coarse aggregate particles nor even fine aggregate, whose effects are usually ignored.

Again we should consider the samples we treated; laboratory-produced artifact having single particles embedded by cement paste don’t subjected to mixing process where shearing action provided during mixing influences formation or orientation of microstructure of cement paste during settling.

In practical case, moreover, water accumulated below coarse aggregate particles, due to bleeding process and voids filled with water are appeared. In this defective interface usually massive crystals of calcium hydroxides are found. In general, stress concentrations at interface between coarse aggregate and cement paste are observed as it is the junction of two elements of different poisson’s ratios and modulus of elasticities.