Skip to content
We know when ground water table reached to surface the soil is said to be saturated up to ground surface. When water table remains at a depth Z1 the soil above the water table is not saturated and below this depth soil is fully saturated i.e. saturation is 100%.
Ground water table may be lowered due to seasonal change or by many man made actions. After reaching a new depth Z2,(Z2>Z1), it is expected to become degree of saturation is zero above Z2. But actual situation is not the same; this is due to presence of capillary forces within pores.
That means some water remains in soil pore or all water cannot be drained out above new water table. Drainable water from soil pore can be defined by several terms like:
• Specific yield
• Specific retention
• Specific storage
• Storage coefficient
Let’s start with specific yield; this is the ratio of retained volume of water from a given element of soil to total volume of water.
The drainage of water must be under gravity. This term is also known as phreatic storage co-efficient. Typical values of specific yield for coarse sand & gravels lie between 0.2~0.3. 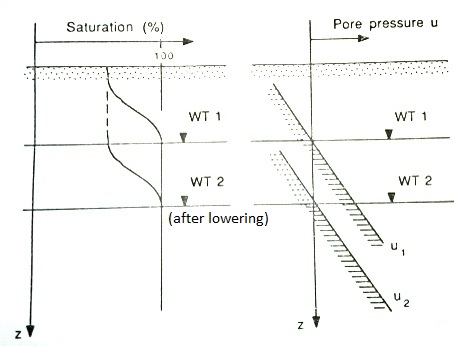 We know, when pore water pressure is decreased under change in water table, the effective stress is increased which produce compression on soil skeleton.

Thus some water from soil mass is released which was fully saturated initially; this process is called consolidation in soil mechanics. Water released as volume from each unit volume of the aquifer soil for each unit change in water pressure (head) is known as specific storage.

In ground water hydrology, it is also known as specific mass storativity. When specific storage is multiplied by thickness of water bearing layer, it yields storage co-efficient of the aquifer.