Skip to content
In bore pile construction shaft excavation is required which requires adequate support to prevent collapse of borehole and to minimize harmful impacts of stress relief and subsequent disturbance of surrounding ground. Almost all bored pile construction need a casing or tube to provide support to the side of bore hole that are driven to lower the reinforcement case and consecutive concreting to finish piling operation. Even in case of cohesive soils, casing is desired to counteract the possible fissures. These is the drilling slurries, with the use of which, casing can be avoided.


Drilling slurries were using for more than 100 years in oil well drilling. From which practical and technical knowledge were established about application in foundation drilling. Slurry displacement method began to use in Texas just after World War II to construct drilled shaft. Processed clay mineral slurry was introduced in the 1960’s which offers elimination for the need of casing for deep excavation. In mid 1970’s, at first attention was paid about proper methods for preparing drilling slurries. , their physical properties and recycling process, following numerous failure of drilling projects.

Bentonite is a clay which principally contains montmorillonite. Though montmorillonite is the major fraction, there have a little portion of minerals like feldspar, quartz, volcanic glass, pyrite, gypsum and other organic matter. Bentonite form a gelling compound when it reacts with organic matter. Bentonite has exchangeable sodium cations and when it disperses, it breaks into particles like plate of which negative charges remain on surfaces and positive charges remain in the edges. If there has no agitation, these charged particles form the above discussed, jelly due to weak electrical bonds. When dispersions are disturbed, the electrical bonds, as it is weak, are broken and free flow condition is established. 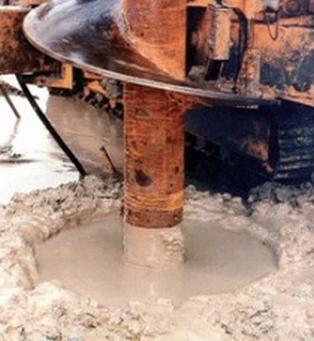 The inherent behaviors of bentonite slurry are:

• It is capable to swell under wetting
• It is capable to keep fine particles in suspension
• Its thixotropy; this means it becomes in gel state when left undisturbed but under agitation it attain flowing properties.

This slurry penetrates into walls of borehole and its gel formation property yields filter cakes which has adequate imperviousness (act as a diaphragm) to counteract hydrostatic pressure of slurry. To establish stability in borehole, the hydrostatic pressure produced by bentonite slurry must be larger than sum of net soil pressure and pore water pressure.

This is all about bentonite. Now it’s time to know the operational procedure. This is simple. Slurry containing bentonite is pumped into outer casing of rig and slurry with cutting soil come out and they are allowed to settle to re-circulate soil removed fairly fresh bentonite slurry to the previous process.