Skip to content
We know bulk density is an important property which is always required in geotechnical engineering for determining slope stability, bearing capacity and also to verify and making decision about compaction method, selection of equipments etc.
This important property is not constant for black cotton soil, though many soils show variations, but these soils subjected to maximum variation. The cause behind this is changes in moisture content in soil and subsequent shrinkage and swelling of soil. 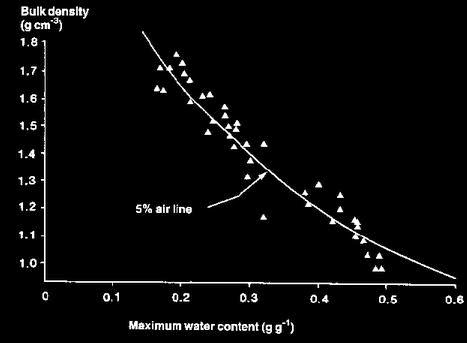 Rao et al. in 1978 found that black cotton soil of Hyderabad subject to volume change up to 60% when dry soil get saturated. Another researchers suggested to correct bulk density for a selected moisture content (25 percent w/w) to minimize errors due to initial water content in soils, which is best understood from following table

The black cotton soil or vertisols are dominated by montmorillonite in their crystals; the expansion, surface area and water-attraction or holding capacity have discussed in this blog and some others are still to come.