Skip to content
During analyzing a structure the distances between column and between floor beams is generally represented by a simple line diagram using a center line to simplify the analysis. But, In practical cases, the column may have considerable width as well as the beam may have considerable depth leaving some modification of the respective length of these members. As width and depth of column and beam respectively, is accounted in these center line diagram, the derived results (moment, shear, torsion etc.) due to self weight and superimposed loads, from analysis is not practical and reasonable one.
These difference between their center line distances and clear distances raised concept of effective of effective span length which results in a practical substantially accurate value of the results.Effective span for simply supported and continuous beams are as follows:

In case of monolithic frames, the effective span shall be equal to the distance between intersections of the center lines of the connecting members. 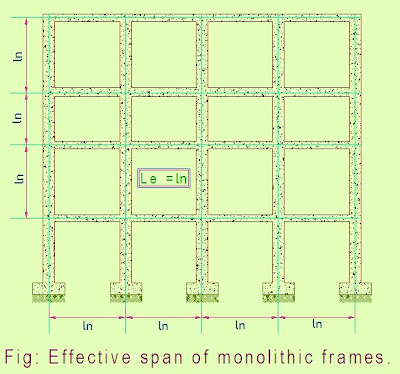